Okay, this is way beyond out of control:

A Pakistani Muslim cleric and his followers offered rewards amounting to over $1 million for anyone who killed Danish cartoonists who drew caricatures of the Prophet Mohammad that have enraged Muslims worldwide.

The cleric offered the bounty during Friday prayers as Muslim anger against the cartoons flared anew in parts of Asia.

Reading this article struck a nerve, because my husband and brother both dabble in the art of cartooning. Granted, I have not seen these cartoons, but it is disturbing to me that these fundamentalists have gotten so out of control, to the point of wanting to kill the cartoonist, over the expression of one’s opinion via art. It really bothers me. It, obviously, has a chilling effect.

And this is why fundamentalism, of any kind, is bad. It causes people to do crazy things, like commit violence over a cartoonist expressing his opinion, or a christian fundamentalist going out and murdering doctors who perform abortions. I just totally reject any fundamentalism of any kind.

Read more about it here.

This is what was on the INSIDE of my kitchen window this morning:

Yes, it is pretty f-ing cold out. I guess it’s the coldest February day in Spokane’s history. It’s 7 degrees out and the wind is blowing. So, with the windchill it feels like -14 degrees. brrrr! 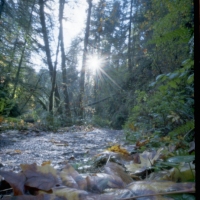