Cover of Life As We Knew It

I finished reading this book yesterday evening. Usually when I read in bed it puts me to sleep after a few pages. Not this one. I had to finish it. Just had to.

And then it gave me nightmares.

The book is Life as We Knew It by Susan Beth Pfeffer. It is the diary of a young woman, Miranda, who is at the end of her sophmore year in high school. Miranda’s life is very normal. She has fights with her mom. She likes to ice skate. etc. She writes about all of these things in her diary. She also writes about the meteor that is about to hit the moon. Everyone is talking about it everywhere. And some people are worried about it but many people take it with a grain of salt, like it’s something there to entertain them. On the night of the meteor everyone in her neighborhood is outside, waiting for the impact; as if it were a fireworks display. Then it actually happens. It appears in the sky and then hits the moon. And then she hears screaming as the moon becomes bigger and bigger until it fills up most of the sky. The meteor moved the moon closer to the earth.

This causes all kinds of worldwide disasters. The first of which are tsunamis that decimate the coastlines and wipe out all coastal cities and the people in them. The electricity goes out and then stays out for undetermined periods of time. Then the volcanoes start erupting. Like the mega one at Yellowstone National Park. This is the begining of a long, hard story of survival.

As I said, this book scared the hell out of me. But it was goood. Boy was it good. A definate must-read. 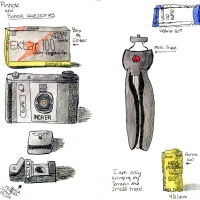