The house I lived in when I grew up was split level. The yard was very large. We would often play in the front yard. we would have races in the yard to see who was the fastest runner in the family. When you walked in the front door and looked to the right you would see the split level staircase. The stairs on the right would go up to my Parent’s room and my room, and the one on the left would go down to my brother and Sister’s room, and then the basement to my older brother’s room. The staircase had an avocado shag carpet covered in a plastic runner. The plastic runner had little rough divets that would scratch when you ran your hand over it. The plastic was see-through. I remember it being dirty and dingy from years of use.

Looking to the left you would see the kitchen. and if you went straight you would go into the living room. Let’s go into the kitchen. The kitchen was divided into two parts. The cooking area and the eating area. The kitchen was divided by a bar which I would sit at often. I recall the predominant color in the kitchen being yellow. The kitchen table was a flimsy looking thing. It was oval and it was made of a dark wood on top, metal legs. The kitchen area itself was rather small. There was the sink right under the window and, going counter clockwise, was the refrigerator, the door, and then the stove. Next to the stove was the trash compactor. All a deep brown color.

There was a large entrance into the living room from the kitchen. There was a very large picture window. I would often sit at the window and watch to see when my mom or dad were driving up Adams road, which meant they were almost home. There was a piano at that end of the room where I would practice, until my mom sold it when my parents got divorced. The other end of the room was darker. There was no window because the fireplace occupied most of the space. The fireplace had a nice hearth that sat up from thefloor so you could sit on it, but it would be very uncomfortable because of the scratchy pebbles the hearth was made out of. We had our couch on the opposite end of the fireplace and the television next to that. The stereo was on the wall next to the couch.

Note from the future (9.9.2011): I just discovered this little bit of writing that has been private for two years. It kind of made me happy to read it so I’m making it public, even though it seems unfinished. I’m not sure what the point was. 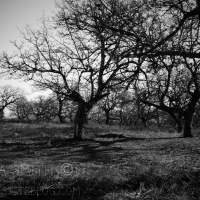