We woke up the next day revived and ready to tackle the streets of Amsterdam. We decided we would get oriented with the city by taking Rick Steves’ Amsterdam City Walk. It started at Central Station and ended at the Rijksmuseum near our hotel. So we made our way back back to the train station. (We both brought our cameras loaded with black and white film.)

Central Station – made with a Canon elan ii.

From there we wandered back toward our Hotel. 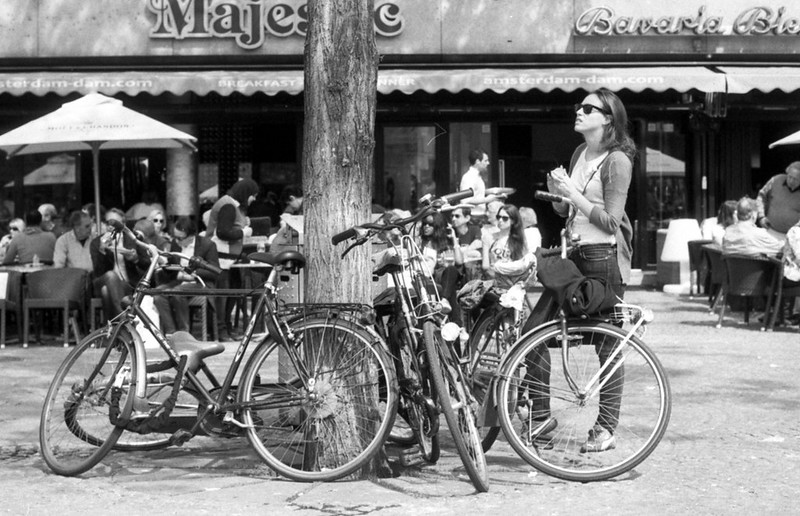 Along the way we were taken (via Rick Steves) to interesting places. One of the the interesting places we saw was a courtyard called Begijnhof. It is full of history and interesting architecture. I was still a little too exhausted to appreciate it fully. However, one thing I found interesting about this courtyard was that there were two churches across from each other, one Protestant and one Catholic. We went inside both churches and I was struck by how completely different they were on many sensory levels (Again, I think because of exhaustion I was taking things in on this level more than intellectually). The Protestant church was light, sparse, and smelled, well, Protestant. I am not sure what the smell of Protestant is. I think it is the smell of cedar, or some equally pungent timber. The Catholic church smelled like Incense and burning wax and was dark. It was interesting to note – and it was kind of cool that they were in such close proximity to each other.

As we wandered along we took more photos.

We made it back to our hotel and it was time to meet up with Brendan, his wife Lorraine, and Jeff for dinner.  We wandered over to the planned meeting spot and there they were, waiting (I’m not known for being on time).

I’m not gonna lie: I was really nervous about meeting my internet friends in person.  Brendan said I would recognize him because of his Irish accent but I recognized him because there was the live, animated version of the person I’ve been seeing in photos for 3 years online! When I introduced myself I didn’t know what else to do so I gave everyone hugs. Things were only awkward for a few seconds and then it all felt as normal as if we’d been hanging out for a long time.  They wandered with me  over to the I Am Amsterdam sign so I could make a quick pinhole photo. 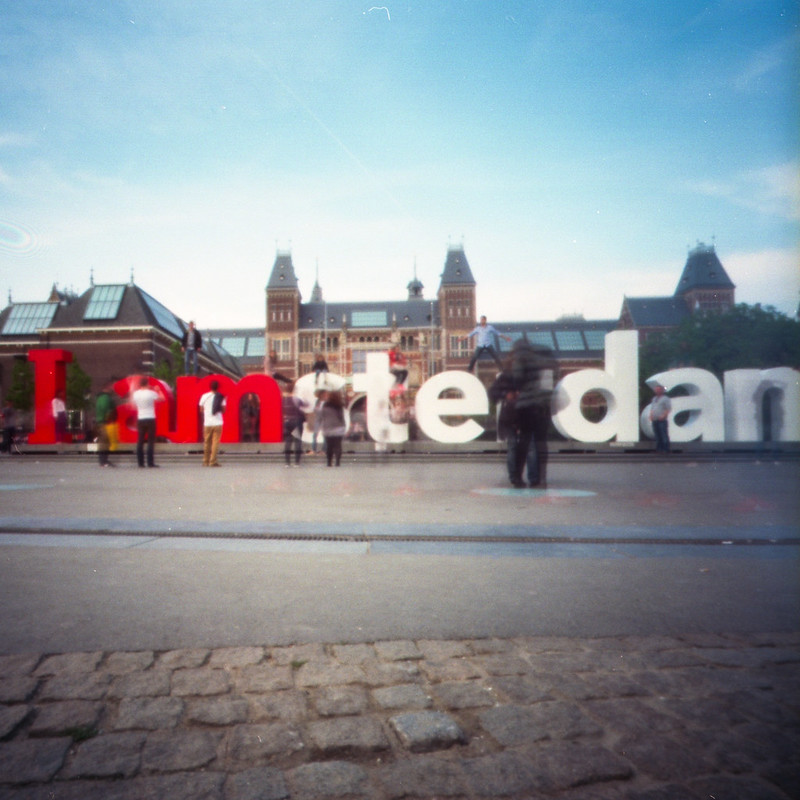 Then we headed out for a drink and then dinner and really great conversation. We completely geeked out with conversation about cameras and pinhole photography and  I can’t even tell you how stoked I was to be talking about this stuff with my friends in person, people who understand my obsession, and who are as obsessed as I am! I think this selfie of Brendan and I   sums up exactly how I felt (taken by Brendan with his Olympus Mju):