“No union is more profound than marriage, for it embodies the highest ideals of love, fidelity, devotion, sacrifice, and family. In forming a marital union, two people become something greater than once they were. As some of the petitioners in these cases demonstrate, marriage embodies a love that may endure even past death. It would misunderstand these men and women to say they disrespect the idea of marriage. Their plea is that they do respect it, respect it so deeply that they seek to find its fulfillment for themselves. Their hope is not to be condemned to live in loneliness, excluded from one of civilization’s oldest institutions. They ask for equal dignity in the eyes of the law. The Constitution grants them that right.

The judgement of the Court of Appeals for the Sixth Circuit is reversed.

It is so ordered.”

So last month the people of Ireland voted for marriage equality  – the right for everyone to marry under the law, regardless of gender or sexual orientation. I followed the story with interest. I was excited to see how this vote would shake out. Honestly, I was super skeptical that it would pass. But  I was also hopeful that it would. If it passed, it would be such an incredible example to the world.

As we all know by now, the people voted yes.  It was an amazing moment, not just for the Irish, but also for everyone around the world who strongly believe in civil rights for all. I was very happy for them. I was also a bit envious because I knew that this is something I would NEVER see in my lifetime here in the U.S.A.

And then BOOM. I woke up yesterday to this news. And just like this we have Marriage Equality in all 50 states. Just like that. thanks to the Supreme Court.

I guess the lesson here is never say never. 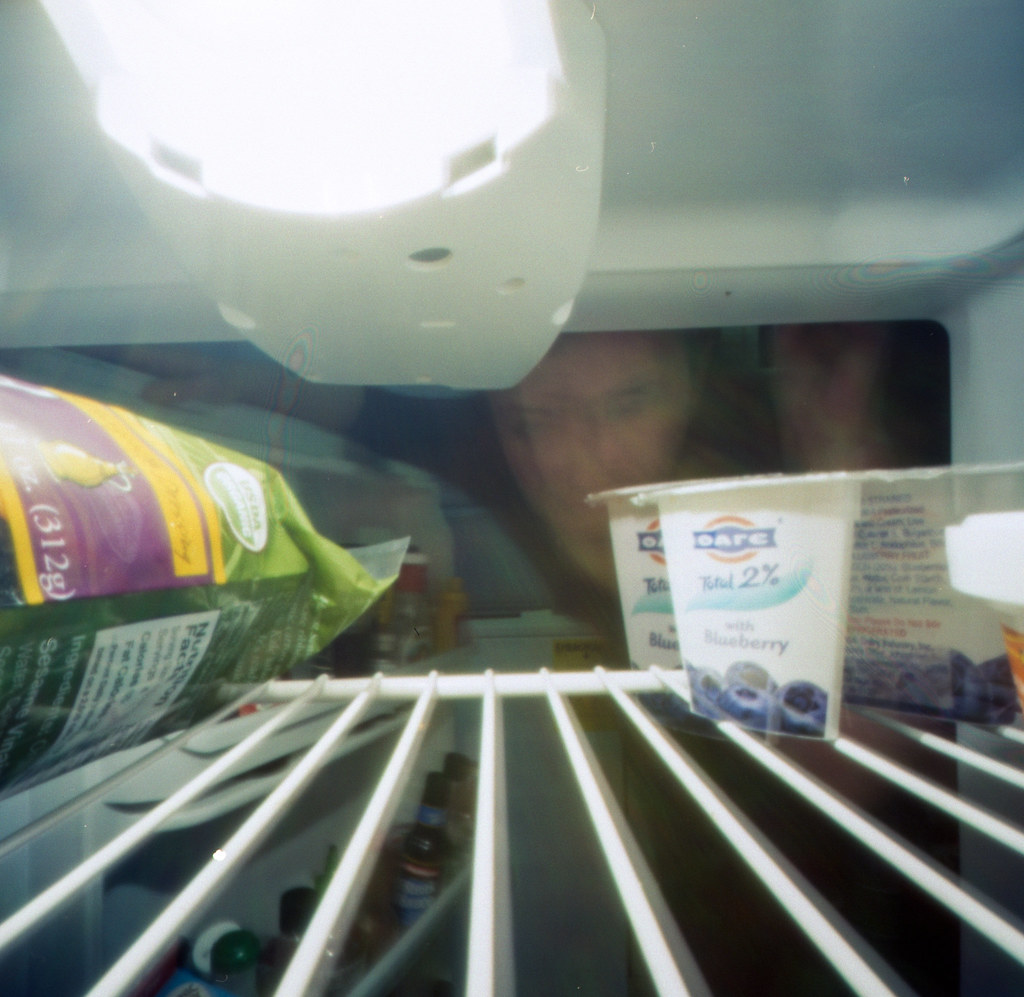 Today’s photoblog was inspired by something a friend said on Facebook a couple of years ago. It was an observation about Facebook being the equivalent of opening up the refrigerator and staring blankly into it looking for something to satisfy a hunger that can’t be satiated with food.

I couldn’t agree more with that metaphor. You will never find what you are really looking for in the fridge. Or Facebook.

Once a month for the past year I have been going on a pinhole adventure with two fabulous ladies who are also passionately interested in pinhole photography: Gretchen and Donna (and do go check out their extraordinary Flickr streams!). I realized that I don’t blog about my pinhole adventures with them! I am going to change that. Starting today.

We call ourselves Pinhole Mayhem. For reasons I can’t remember. I think it’s our band name. or something?

Anyway, here are photos from our March outing. We went to the Tulip Festival in Woodburn.

We started out at the Fred Meyer in Wilsonville where I grabbed a coffee. Gretchen had the idea to open up the shutter of her pinhole camera and “go shopping.” I thought it sounded fun, so I did it too. Here I am shopping in the booze aisle. 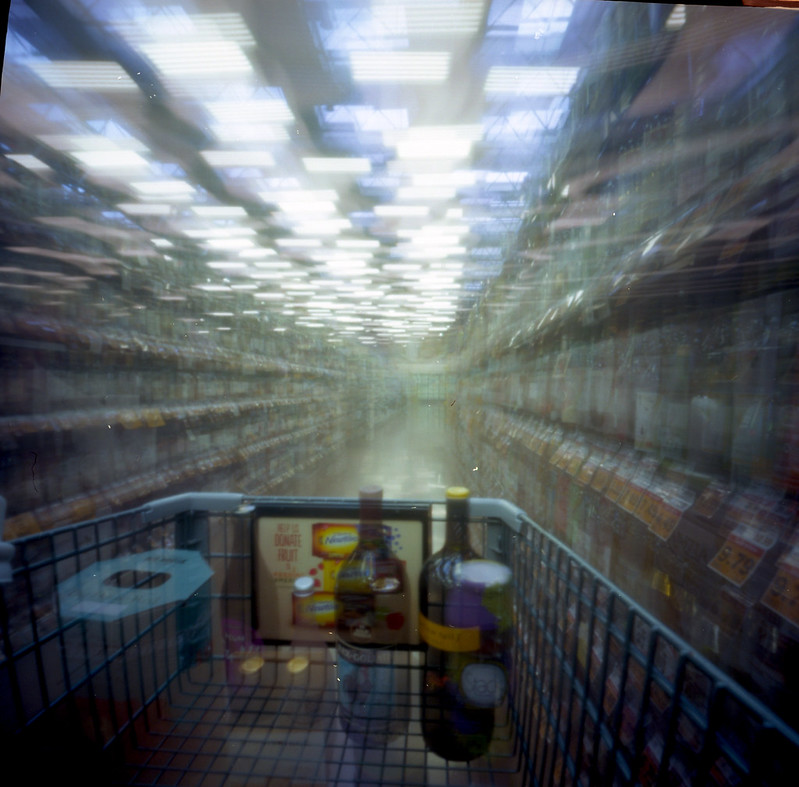 the Fred Meyers employees didn’t look at me weirdly AT ALL.

afterwards we went to Wooden Shoe Tulip farm – in between torrential downpours, luckily. We spent a couple hours tiptoeing through the tulips. 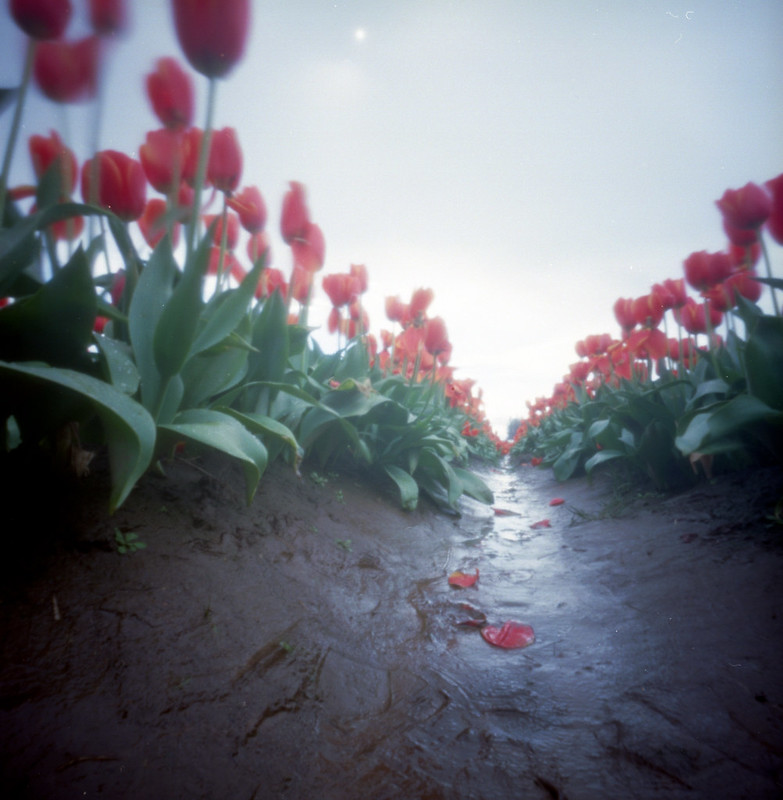 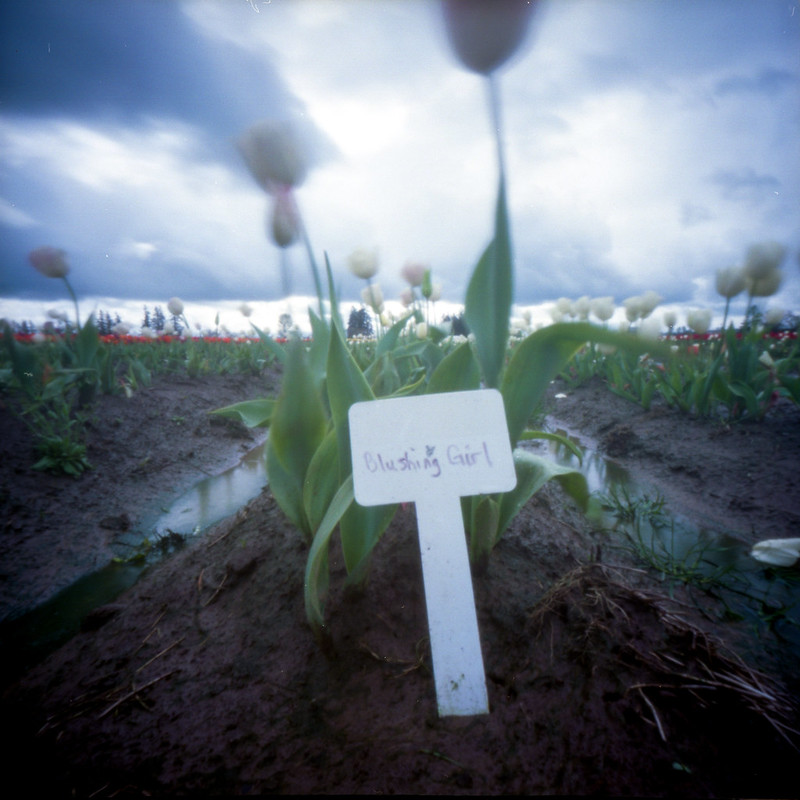 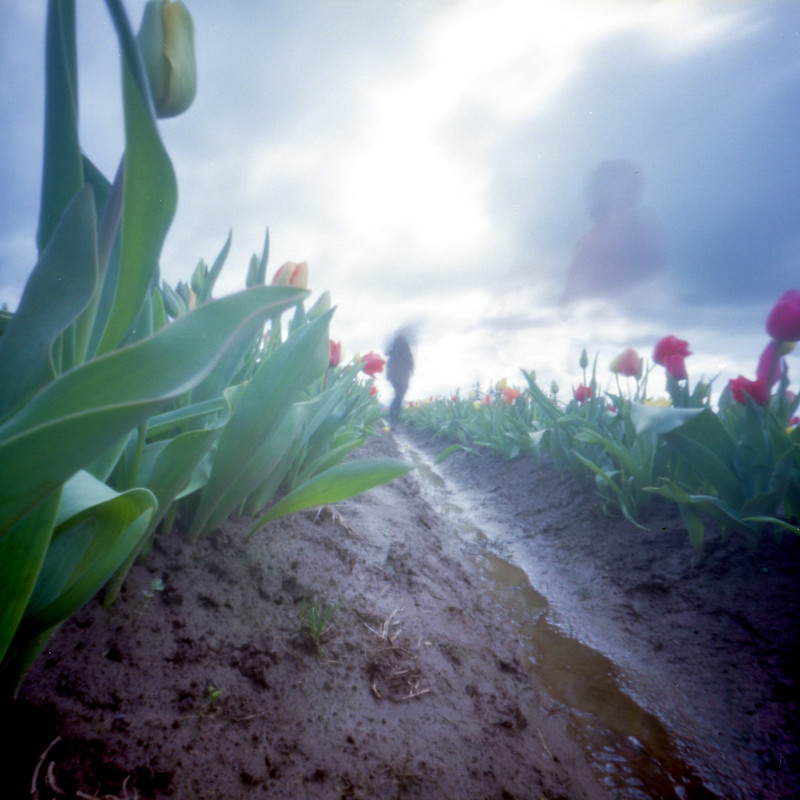 Ghosts in the Tulip Field.

And here is our group portrait for the month: 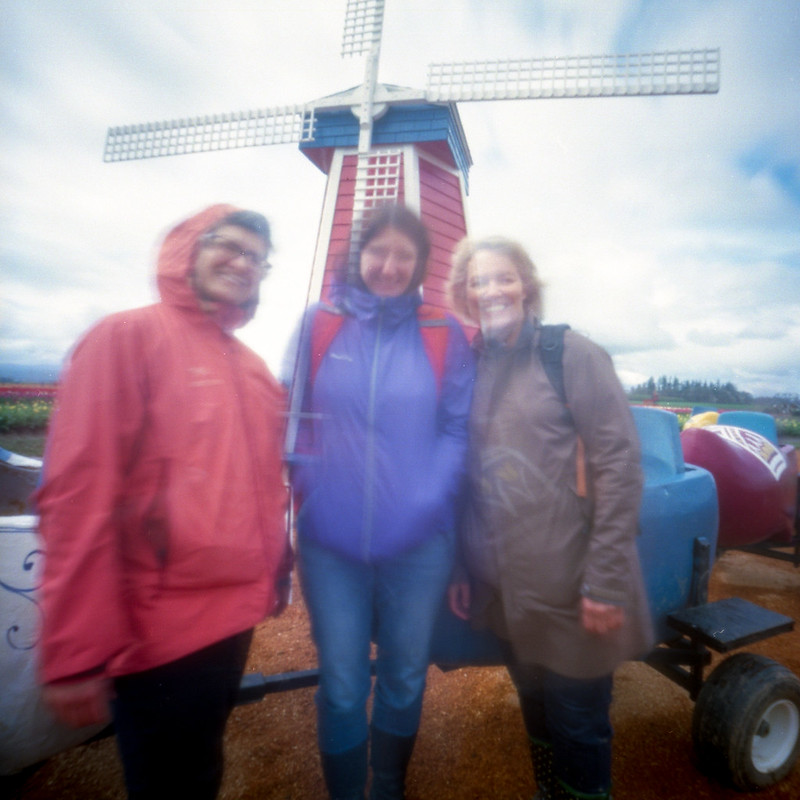 for some reason we didn’t bring the masks with us this time.

And we often cap the outing with lunch. This is my new favorite shirt to wear when I do pinhole self portraits. 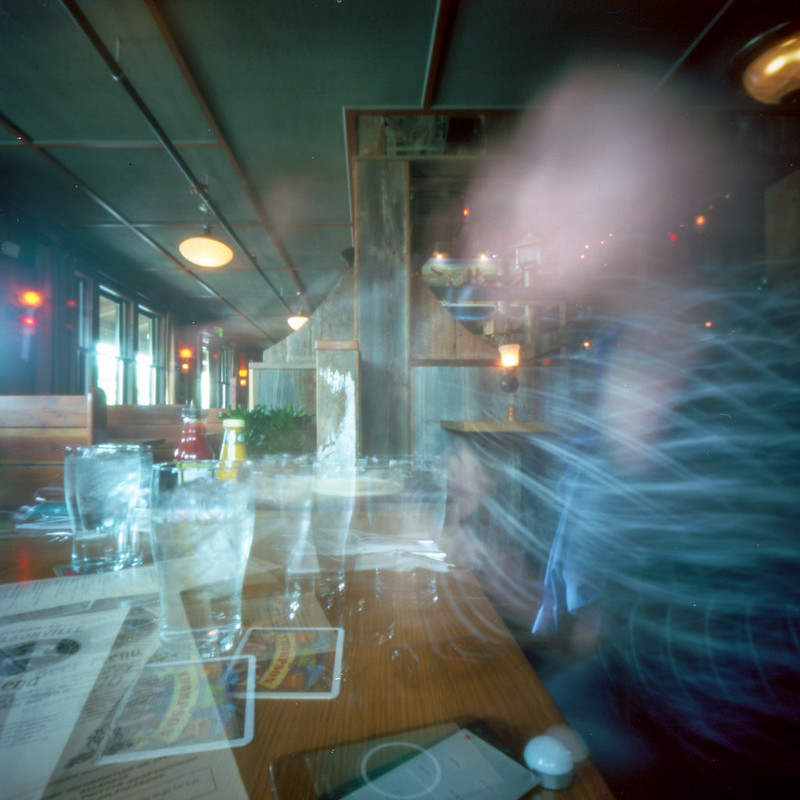 For all of these photos I used my Zero 2000 and Ektar film. You see more from our adventures on my Flickr. 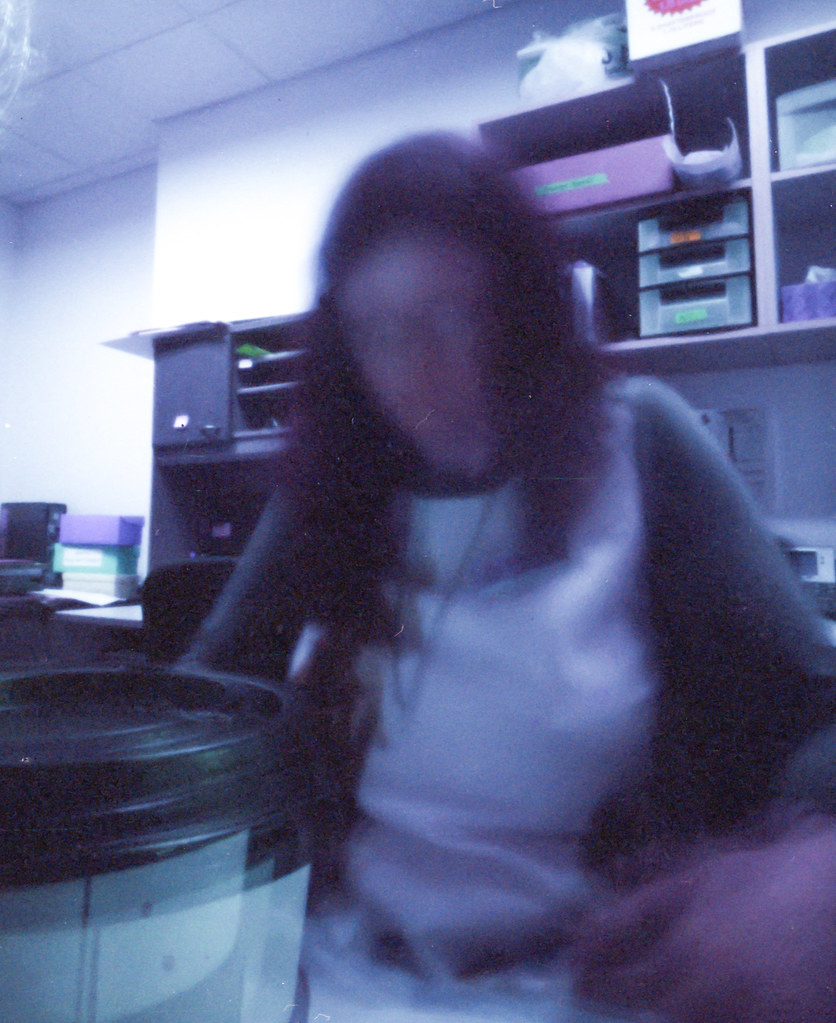 Today’s photoblog is a self portrait I took last month with the fabulous Terrapin Bijou using Lomo Purple film. I don’t know why, but I like this image. It kind of evokes a general feeling about work that I’ve been feeling these past few weeks. It’s not necessarily a bad feeling at all, just a tired feeling. I’ve been very busy getting ready for the Summer Reading Program and it’s exhausting. I have so many blog posts half written it’s not even funny. But there is always time for a photo post! And, apparently, there is time for a pinhole photo at work. 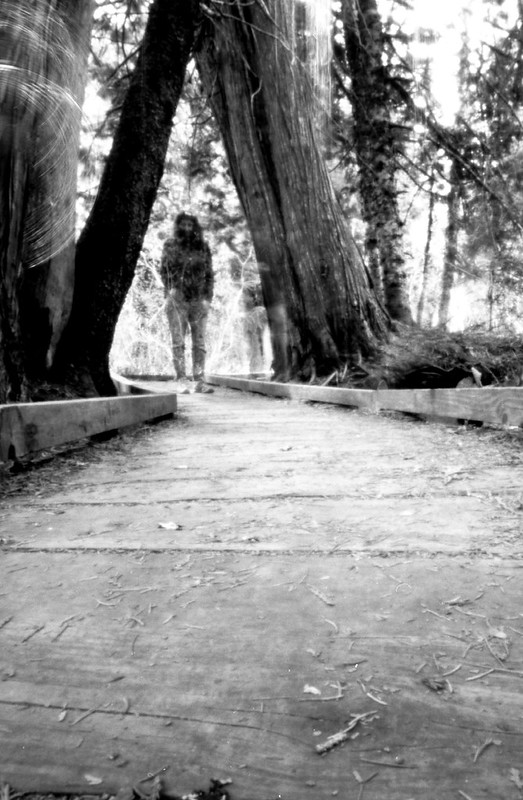 Today’s pinhole self portrait was taken the same day as this one – at Trillium Lake on Mt. Hood. It was my second outing with the Terrapin Bijou, a camera gifted to me from Todd Schlemmer, maker and creator of the camera, on WPPD. I have since gone through about 4 rolls of film in this camera. I love it and can’t recommend it enough. The 4.5 x 6 format is new to me but it didn’t take long for me to warm up to it. It doesn’t hurt that you can get 16 shots on a roll.

Expect to see lots more results from this camera on the blog!