This has been a rough weekend for me, physically and mentally. I have been sidelined from my running with a stupid injury and I’m only a week into my training. I was doing so well, too. I did my two speed runs as well as a 2 mile recovery run. My speed has been improving, which I was excited about. And in the process I managed to run more than 6 miles for my speed work run, and it felt good. 6 miles is a lot for me! I was feeling really good about myself.

Then I ended up getting an infection due to running bra chafing. It turned out to be really bad and very painful. It hurts to move.  On top of that I suffered a really bad migraine all day yesterday and was in bed. I haven’t left the house all weekend. The doctor has ordered me not to run until the infection is healed, so I wasn’t able to do my long run today.

I am a mess. I am depressed and cranky.

To cheer myself up I thought I would search for quotes about struggling with defeat and I found this one from Edwin Markham “Defeat may serve as well as victory to shake the soul and let the glory out.” A little more searching and I found that it was a part of a poem:

Defeat may serve as well as victory

To shake the soul and let the glory out.

When the great oak is straining in the wind

The boughs drink in new beauty and the trunk

Sends down a deeper root on the windward side.

Only the soul that knows the mighty grief

To stretch out spaces in the heart of joy.

It is Samsara. It will end. My body will heal and I will get through it and I will be a stronger person because of it.

On our weekend visit to Dublin, our hosts took us to the Irish countryside to visit some old ruins. One of them was the site of the Priory of St. John The Baptist.

We were able to climb around all over the place, including up some winding stairs. In the stairwells there were very narrow windows and I thought they might make an interesting frame for a pinhole photo.

This (and the other places we visited) were amazing to me, having never been around such old ruins before. I was impressed by how much of the structure is still standing, and that we could still (fairly) safely walk up the stairs!   The place was built in the 13th century! 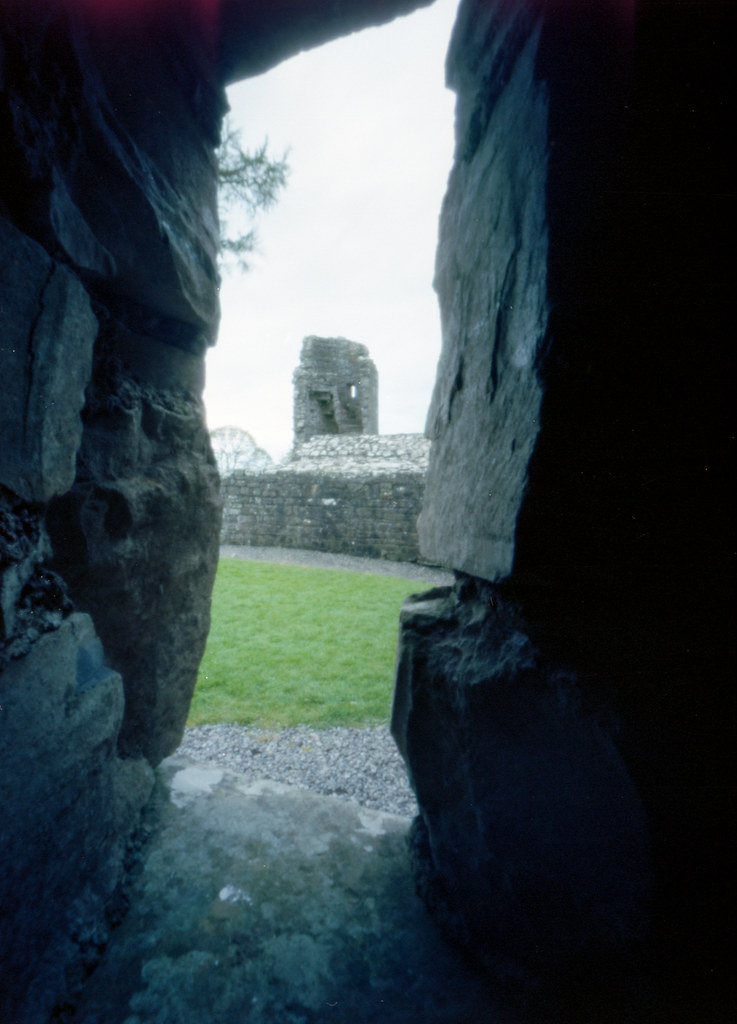 I have some pinhole photos from the other places, and will post them later. Stay tuned!

So I thought I would blog about my adventures in training for my first half marathon. Mostly because I like to think things through via the written word and my blog has served as a really cool diary over the years. It will be really great to look back on this time later in the future. In other words, I’m mostly doing this for myself, but if you are reading this and are inspired/get anything good out of it, yay! Icing on the cake.

As I mentioned in an earlier post,  I am running the Boring Half Marathon in 14 weeks.  I scoured the internet for training programs and Settled on the Nike training plan.  I like it because it is very flexible and suitable for all levels of ability. I started it last week.

There are two days of speed work and one long endurance run. These are supplemented with “recovery.” Two of the recovery days you are to go for a short, mellow run. The other two days are for rest or cross training.

I started on Tuesday with speed work. The first day of speed work is to be done on a track but I decided to just go to the gym and use the treadmill. For each run you are supposed to stay within the parameters of your pace for a 5k. 10k. tempo run, etc. I thought it would be easier to monitor my pace as well as keep track of my laps on the treadmill. It worked well, aside from some technological hiccups (I’m forever having technology problems on my runs).

The second day of speed work were fartleks. I have never done fartleks before and wow. It was hard. I finally had to give up on keeping track of my pace and just go “a little faster” than I did during the recovery minute.

My endurance run for the week was 4 miles, which was a breeze for me since that is how far my everyday regular run is. Well, except for the fact that I had a migraine that morning. I sort of procrastinated it because I worried about running with such a horrible headache. But the drill seargent in me forced myself out the door and I managed it, but I took it real slow. Amazingly, the headache pain went away! But I still felt the nausea. I kept telling myself that I will likely have to endure discomfort when I run 13.1 miles, so this is just part of the training, running through discomfort.

Running is half psychological, I think. or a good portion, anyway.

I also managed the two extra runs during the week as well. So I did more running last week than I normally do. I and I am still alive. Let’s bring on Week 2!

Lorraine: Did we get on the wrong train? I think we just passed Howth.

Brendan: Damn, yes it looks like we got on the wrong train. Well we can just go to Malahide Castle instead.

Turns to Monica and Rafael, Disappointed. Is this OK?

Me: Um. We are going to a freakin’ castle. I’ve never been to a castle before. I think it’s OK.

OK, the conversation probably didn’t go down exactly like that. But still. Ireland is crawling with castles. It was awesome to see a few of them, including this one.

Here is a pinhole photo of Malahide Castle. You can read more about its complicated history it over on Pinhole Obscura, if you would like to learn more.

And with this post I have reached the end of my 2016 100 days  project! It has been a fun ride, as always. I am looking forward to bit of a blogging break to focus on other, non computery things. Like training for a half marathon! I plan to check in here a couple times a week. as per my usual blogging schedule. Maybe I will even blog about how my running is going. 🙂