I brought my Reality So Subtle to work with me last month to play with. Again, I made a shot each with both pinholes. I am going to be displaying my pinhole photos in the library at the end of the year and am working on a theme of “Pinhole In The Library.” For the shots that I made I was trying to channel the library ghost (which is a thing, btw. We have ghost in the library). But, alas, I moved to too fast for pinhole. I’ll try again.

The above shot was taken using the top pinhole, so it angles upward more. As you can see this camera has a gnarly vignette with the top pinhole, which I will end up cropping out in future shots. This particular one, for reasons completely unknown to me, made Flickr’s Explore a few weeks ago. 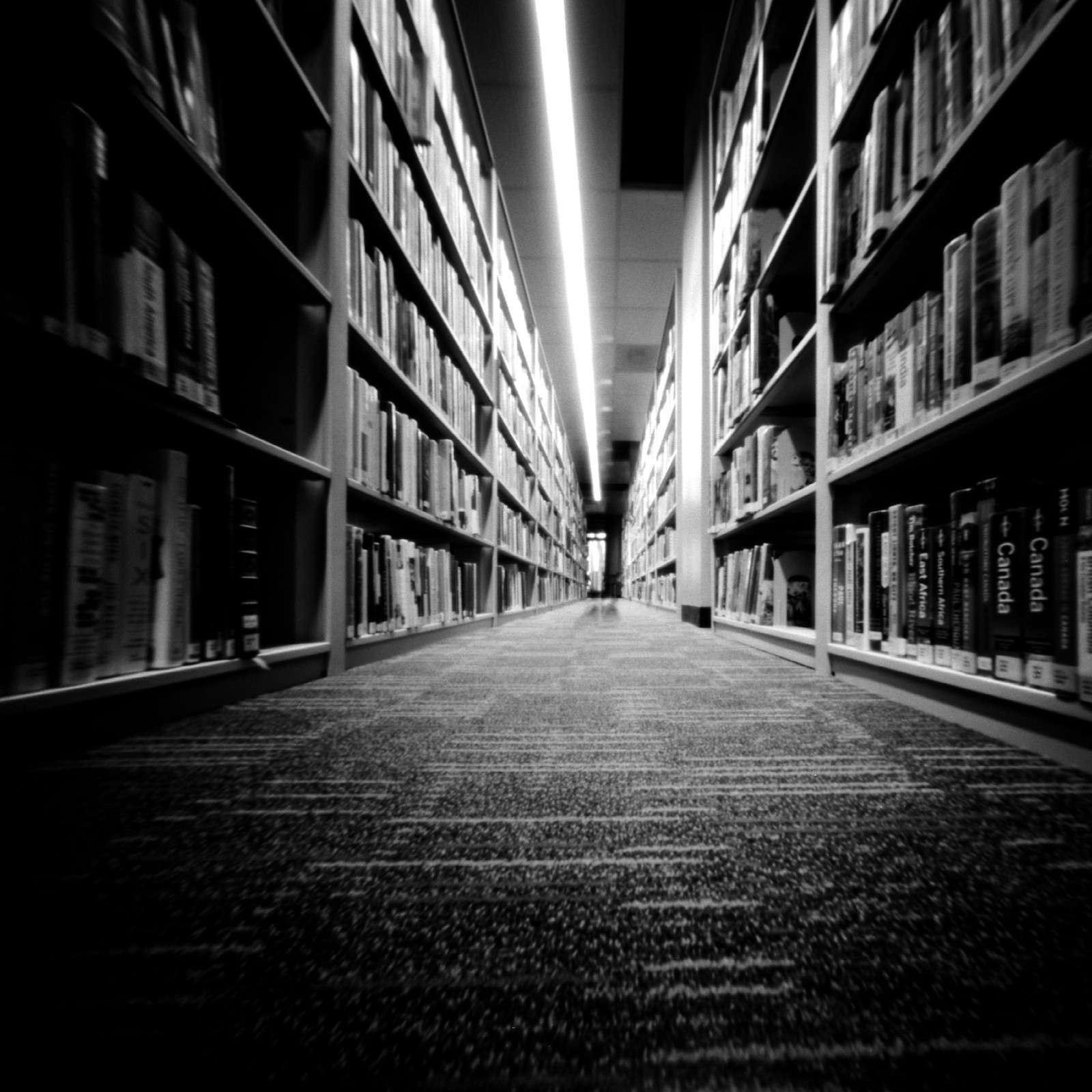 This one was taken using the bottom pinhole. Less vignetting.

For both of these shots I used Acros 100.

My next series of photographs will be my first from the Ondu MK2 6×6 format. I received my Kickstarter reward in June and immediately loaded it up with film. Over the course of the next few months I tested it with a number of different rolls.

To kick this off, I will also introduce a truly remarkable photographer. I was introduced to his work in Barcelona’s Fundación MAPFRE. I gave the visit a ridiculously quick mention in this post, which does not come near a fraction of how much this exhibition affected me.

The photographer is Hiroshi Sugimoto.  To be honest, there isn’t much to say because word fail me. I found his work simply mind-blowing. You must go visit his website. And if you ever have chance to see his work in person, for the love of god, go see it. The remarkable thing about his work are the prints and you have to experience them in person. A computer screen does not do his work justice.

The photo I am sharing with you today was inspired by his “Theaters” series. The idea was to capture an entire film in one frame of film. You can read more about it on his portfolio here. When I saw this I wanted to try it with a pinhole camera. The opportunity came when my husband and I caught a film at the Edgefield’s Powerstation theater, where you can eat dinner and drink a beer while watching the movie. This allowed me to prop my camera on the little counter in front of me instead of hauling in a tripod.

Here is a pinhole shot of the winter-ized entrance to Timberline Lodge. This was shot during the last Pinhole Mayhem outing, in February. 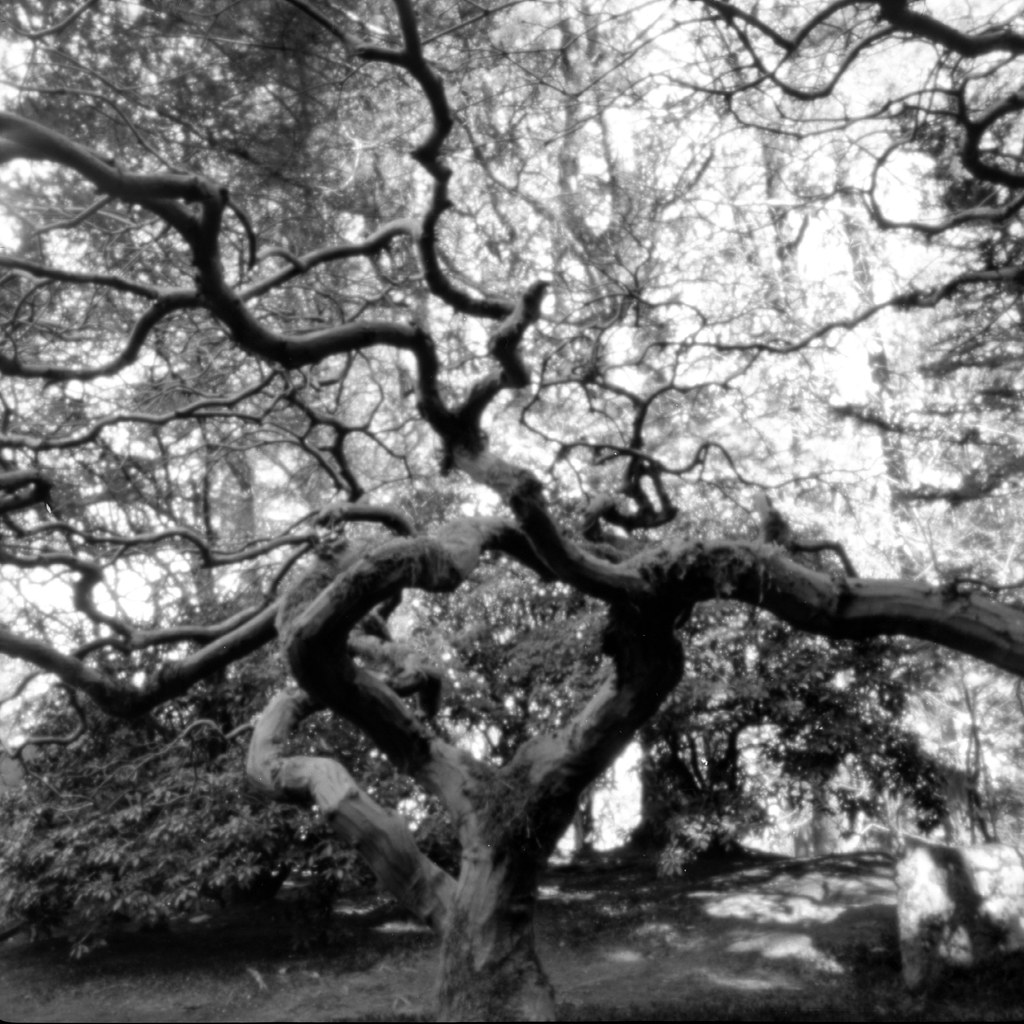 Last month I visited Portland’s Japanese Garden with a roll of black and white film in my pinhole camera and thought I’d try pinholing The Tree. Here is the result.

Today I pinholed it again, but in color, with expired slide film that I will cross process. I was there with my fellow Pinhole Obscura blogger, Jeff. And I got to meet another pinhole photographer, Souhade of Pinholistically Yours. They are in town for WPPD on Sunday! Exciting stuff. I’ve had a great time seeing the photos from my internet friends converging on Portland this weekend. It reminds me of the anticipation and excitement I had when I went to Amsterdam last year. I am missing a little of that excitement this year since Portland is home and I’m not going anywhere. Seeing the excitement of my friends makes up for that. 🙂 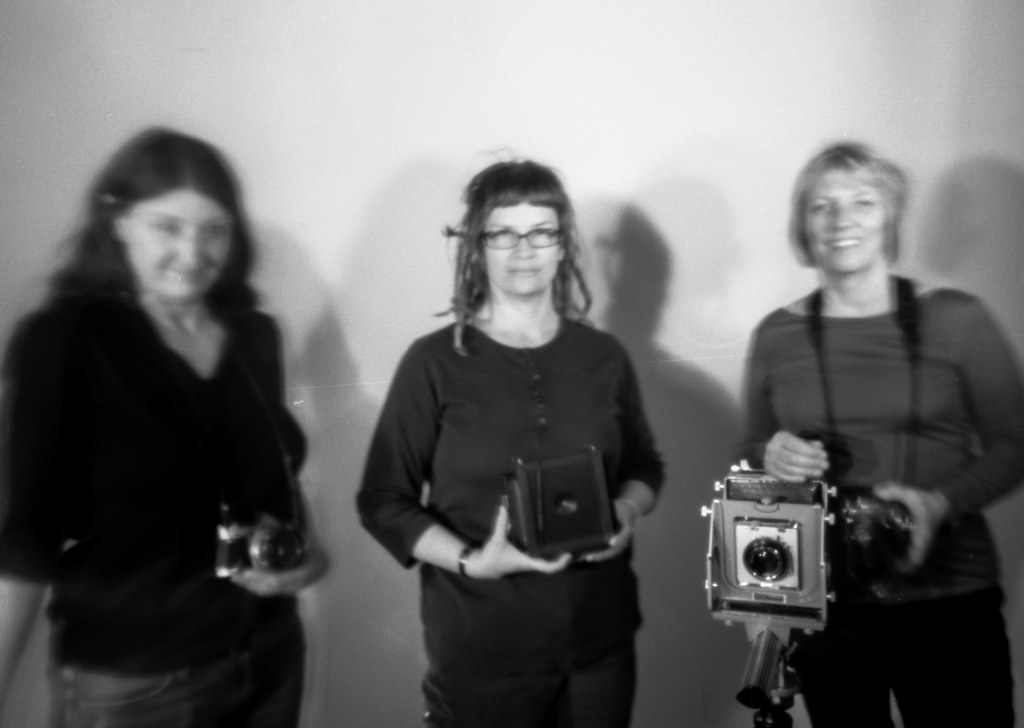 I love this photo. It reminds me of a very fun day with my pinhole crew (we are calling ourselves Pinhole Mayhem). For this particular outing we rented the portrait studio at Newspace and tried our hand at Pinhole studio portraits. It was super fun.