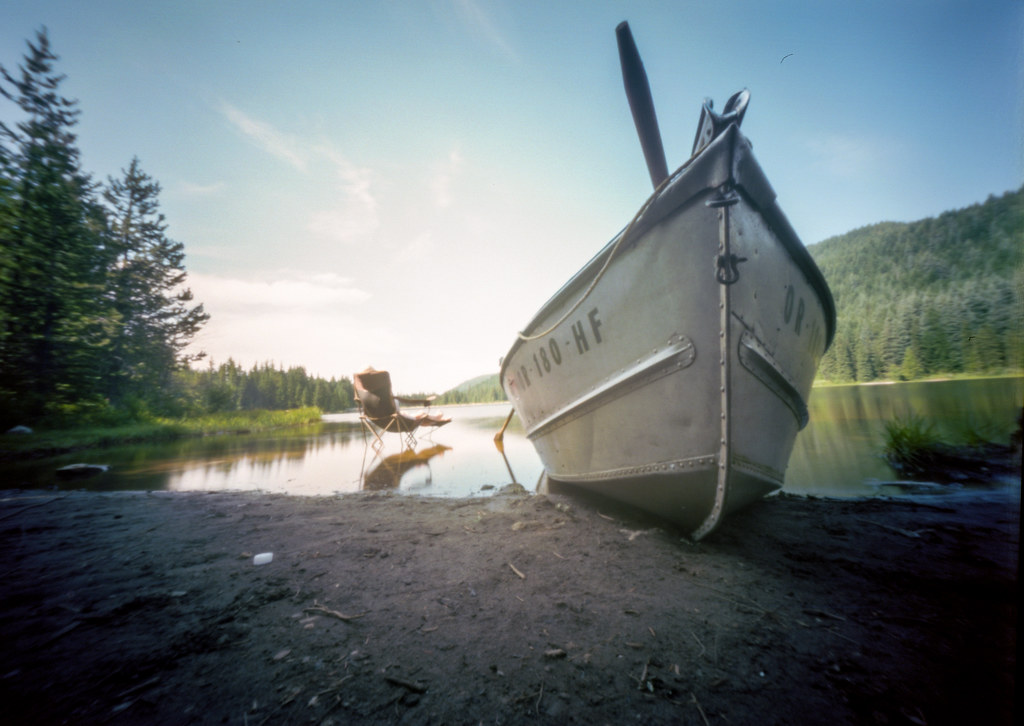 Every once in awhile I will look at one of my photos and I will say to myself, “Monica, you’ve made a pretty good photo there.” I can probably count on one hand the photos I feel really and truly good about. This is one of those photos. I really like it alot. It helped that when I took it I was hanging out with two very talented pinhole photographer friends of mine, Donna and Gretchen, and that I basically stole their composition. 🙂 Well, copy-catted them anyway.

We had such a great day! I swam in the lake with a unicorn mask on. It was fun!

I am drawn toward pinhole photographing people, myself included. I am fascinated with what might happen on film when movement is blurred for longer periods of time. Maybe a person will show up on the film. Maybe they won’t. If they do show up, how will it happen? In the photo above I used my Holga and photographed a drum circle I participated in last month the evening of the super moon. This photo was exposed for 20 minutes. I wanted to make sure something was in focus the entire time so I placed the camera close to the candle holder. I wasn’t sure how this would turn out at all because there was a ton of movement. At one point someone came and sat down on the table the camera was on and I was afraid they were blocking the view, but that wasn’t the case. Or if they did, there was enough of the exposure prior to them sitting down for it to be captured on film.

I thought I would also experiment with self portraits. I captured myself meditating for 10 minutes. I love the way my image is there and is not there. Again, I used my Holga. This time I used 400 speed film, Fuji. I don’t like the subdued colors of this film. I prefer the saturation of the Ektar (used above).

This was taken with my Zero 2000 at a waterfall in the Columbia Gorge on a hot day. I think it is a 2 minute exposure using Ektar 100. Again, I dig the movement of the people. It’s not a perfect photograph but It is one that has me thinking about photographing crowds of people.

Continuing my scanning spree, here is a photo I took hiking Tom, Dick, and Harry Mountain. As you can see, it was a beautiful, clear day and we got a fantastic view of Mt. Hood. It was the first time I had been on this hike. Really fun! I learned a few things on this hike. First of all, I learned that 7 miles is the perfect distance for a day hike for me. I like it because you are not spending an entire day hiking, thus, I can still get stuff done. The bonus is that I am not dead tired the next day. The other thing is that Raf invented the most fantastic hiking beverage. It is a mix of water, coconut water, and a splash of lemon juice (no sugar or sweetener!) We may have also added a few chia seeds. It was the perfect drink for a hot hiking day. The lemon slaked our thirst and prevented us from drinking our water too fast. Coconut water replenises electrolytes.

I’ve been spending time this weekend scanning negatives of photos from recent hikes. This was taken on my hike to Ramona Falls. I love how it really emphasizes how tall the trees are.

This was taken with my Yashica Mat 124g and Portra 160 film.

Here is another photo from the Stonehenge Memorial along the Columbia River in Washington. Made with the Yashica Mat and Tri-x.