So pinholeday! I need to share my photos with you. I shot a couple of rolls of film and really liked a lot of what was on the roll. I was super thrilled that they came out because I developed them myself and I’m still a little uneasy about developing c-41.

Here are a couple of shots of the Painted Ladies. I really am happy with how these came out. I was a bit worried about the composition because the park across the street was closed and that is generally where people stand to get the famous shot of them. But with the magic of pinhole the cars driving by disappeared and the wide angle helped me get a unique shot right up close. I was practically standing on the steps for the second shot! 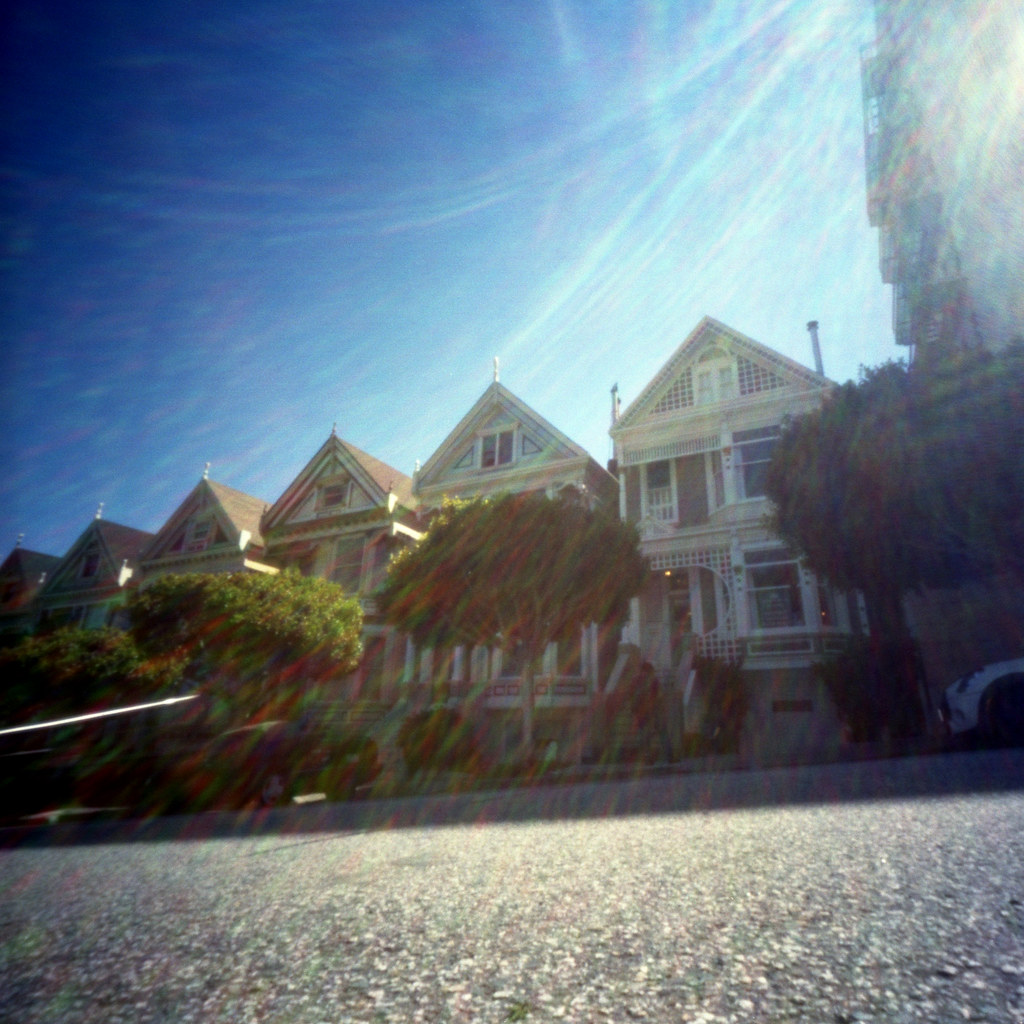 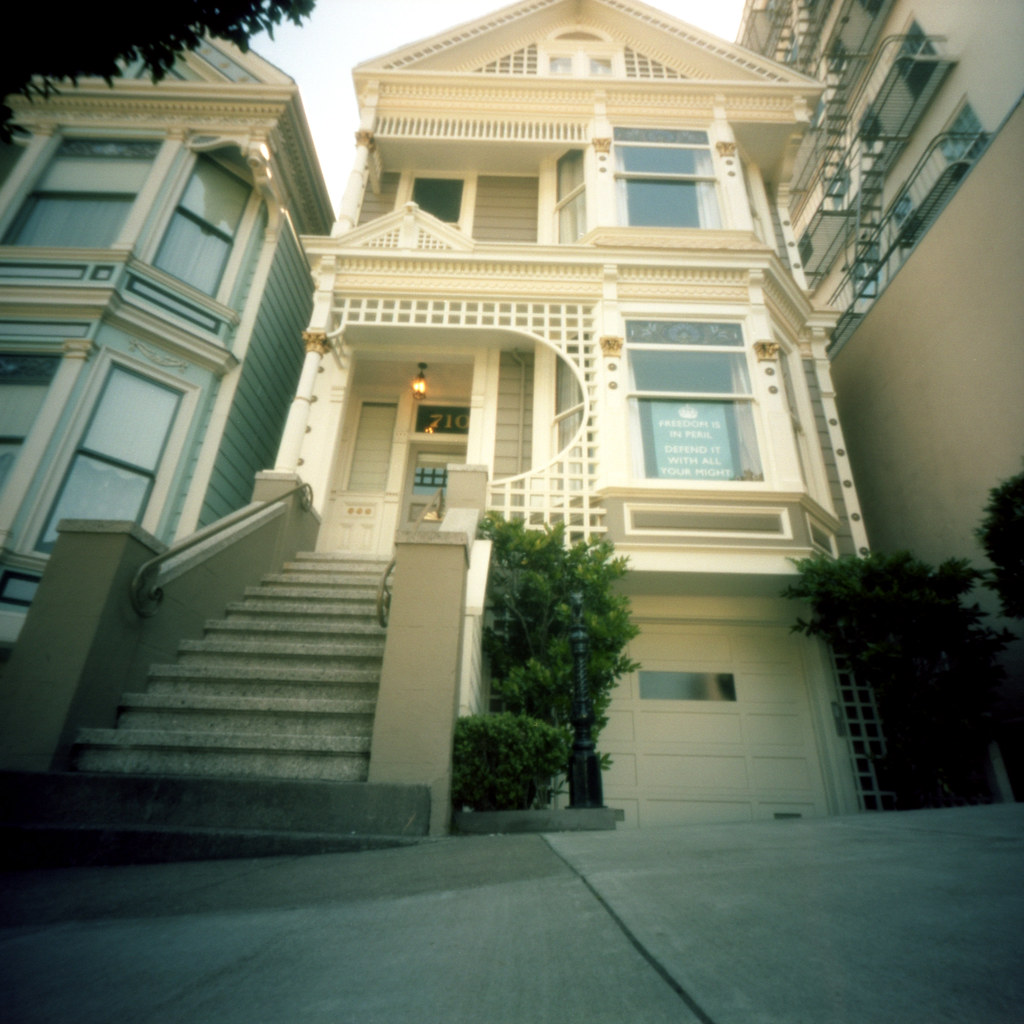 I can’t believe I didn’t post my Pinholeday photo on this blog! As I mentioned, I’ve been really struggling with depression for awhile and a lot of things have slipped my mind. I think I’m finally starting to feel better. And thus remembering to do things that I haven’t done.

I am actually really happy with many of the photos I took on Pinholeday so I will post them here as my next Friday photo blog series.

This year I met up with my pinhole photography buddies in San Francisco and we had a great time hanging out, wandering the streets of SF. Here is one from when we walked through Chinatown. I turned my camera around toward one of the shops. I really liked the mist of the flowing crowd through the frame.

I have written about my experience walking across the Golden Gate Bridge in March. It wasn’t a pleasant one. When I came home and after I wrote my blog post about it I found myself wanting to watch The Bridge again. I don’t know why. This bridge has been haunting me.

What I did not tell you about that day was that I was also shooting photos on a roll of film that I would send overseas to Brendan for another round of his International Film Swap project.

The photos from the bridge are as haunting as the bridge itself. Kind of spooky, actually. Here, have a look:

Honestly. Does this need any explanation? It gives me chills.

I showed this to Raf and the first thing out of his mouth was, “Final resting place.”

When I shot this sign I thought it was kind of funny and rebellious. If you look closely you will see that right under the word “Bridge” is the word “Mortuary” (from Brendan’s double exposure). Indeed, the place feels very haunted to me. Lots of very sad souls there.

There are more really cool photos from the swap that are less morbid and I will share them in another post. Stay tuned! We arrived in San Jose on Monday afternoon. Yesterday we drove over to Santa Cruz and spent the day there. It was weird being there again. It just all feels so familiar. I feel like I have been in an alternate universe for six months and now I’m home again. Like I’ve never left…

So first we went to UCSC to the Bay Tree Bookstore to buy a new UCSC sticker for my car. I also bought a Zen Slug t-shirt, too. I’ve wanted one for a long time. It was so beautiful on campus. The Redwood trees, the lushness of the forest, the smell of the Bay trees. It’s awesome. I’ve miss it. AND it was so nice that I actually took off my coat. TOOK OFF MY COAT! I was stoked.

Next we went to the ocean and walked around. So beatiful. I took pictures and will post them when I get back. They speak for themselves.

We drove north up the coast toward Ano Nuevo. It was just so beautiful. It was sunny and the views were incredible. I miss being able to hop in my car and drive up the California coast anytime I wanted. as we were driving I just drank it all in, knowing that I will be back in Spokane next week.
After that we stopped by our favorite hippy store, The Food Bin and the Herb Room. Raf bought some organic cookies and i got some bulk lavender lotion.  There was some lady in there buying herbs to try and heal her sinus infection.
After that we went to Pogonip to try to go for one of our favorite hikes. It ended up being too muddy so we didn’t get very far.

Then, finally, we drove down to Capitola and  walked around the village. Peeked in some of the shops, walked on the beach.

I can’t believe all that we packed into the day! Any one of the things we did yesterday would be an excursion for a single day.

Later on that evening we went to Santana Row because we hadn’t been there yet. We were in shock. A few years ago it was a shabby, empty outdoor shopping center. It is really nice now, although I don’t think I would want to live in one of the condos above the shops.

Today I went to SCU and had lunch with some of the people I used to work with here. It was so great to seem them all again!

I will try to update again this week. Will probably go to SF later this week.