I FINALLY have photos to show you! These are some pinhole photos I took in January up on Mt Hood on a hike around Trillium Lake with some friends. The hike was meant to be a full moon hike but the clouds didn’t clear so we didn’t see the moon. But the sun set about halfway through our hike and it ended up being really fun hiking in the dark. I didn’t shoot any pinhole in the dark, for obvious reasons! 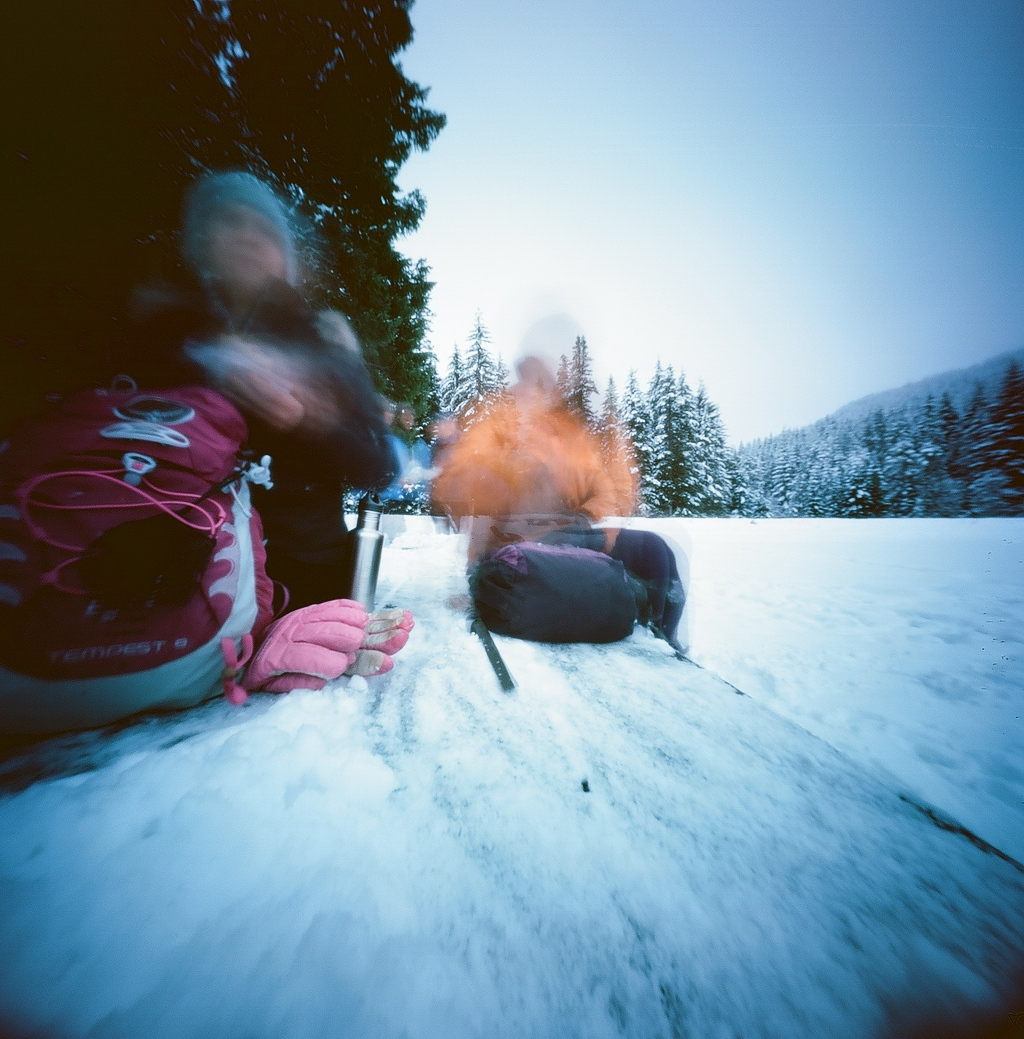 These were both shot with a Reality So Subtle 6×6 and Ektar Film The exposure times for both were around 2 minutes or so.

For developing, I did something different. I sent them off to The Darkroom for developing AND scanning. It was nice to not have to scan these and I didn’t have to do any post processing at all, apart from cropping out the vignette. The only downside is that I got the lowest quality scan and they are not very big files so if I ever want to print them I will have to re-scan them.

OH! And I can’t believe I didn’t blog about this! I was interviewed on a new podcast about pinhole photography: The Lensless podcast, a few weeks ago. You can listen here.

As I mentioned, we went snowshoeing yesterday. The second time for me and Raf. The first time was almost four years ago. We had a fantastic time and I don’t know why I waited so long to do this. Mt. Hood is practically in my backyard. Seriously, it only takes about about 30 minutes to get to this place.   Here are some photos from our fun day!

I went snow shoeing today for the second time in my life and had a fabulous time. We went to Trillium Lake on Mt. Hood. I am knackered though. So I’m gonna drink some hot cocoa, then I’m gonna take a bubble bath (with epsom salt) and paint my nails.

Here is a photo of a raven eating the rest of my friend’s sandwich.

Raf and I went snow shoeing for the first time on Sunday with some friends of our from work. Can I say? It was a blast! I think I am hooked. It was so great getting outside into the fresh air and wilderness again. I have missed it! Raf and I usually go on a weekend hike and have for years and years. That is, until we moved to Spokane and experienced winter. The snow and ice has kept us indoors for the most part on the weekends. And it kind of sucks. But snow shoeing! Wow! What a great way to get out and get some exercise in this weather!

The day was absolutely gorgeous! Nice and sunny. And kind of warm, too. It had to be close to 40 degrees up there. I actually got quite warm and peeled off several layers. This could have been because I was working pretty hard. Snow shoeing is quite the calorie-burner!
There was one sort of scary mishap. We were bushwhacking up a ridge and were going over a fallen tree. Since the snow was weaker there I fell into a hole and got stuck. Thank goodness I was with some experts. They got me out of there without a hitch. I started to kind of panic but they said that falling into holes is kind of common and happens to everyone. And, indeed, it did happen a couple of times to other people. So it is something I should be prepared for if I go again. The thing that I loved about it was that I could go places that would be completely un-passable in the summer. We trekked over what would be thick brush and bushes if it weren’t for the snow.

Getting up there and down from there was kind of a trip. We almost hit a deer that jumped out right in front of us. I am sooo glad we didn’t hit it. And then on the way back down the mountain we were driving around a corner and came upon a truck that was on it’s side and three young men were climbing out of the driver’s side window. The wreck had just happened. We stopped and tried to help them. We couldn’t do much except make sure they could get a ride to where they needed to go, which we did. The wanted us to help them push thier billion ton truck back onto it’s wheels but we didn’t think that was a good idea. We all have back problems and didn’t think we wanted to kill ourselves trying to help them in this way. Leave that to the professionals!