On Sunday Raf and I went for our weekly hike. We chose to got to Farragut State Park in Idaho. I love this park. We used to camp here when I was a kid and I have good memories of swimming around in Beaver Bay.

We decided to follow a trail laid on in the appendix of the book, “100 hikes in the Inland Northwest” by Rich Landers. It was called High Trail (or something like that) and it took us climbing up rocks and boulders high above Lake Pend O’Rielle. It is beautiful, but also more strenuous than I’m used to.

When we were about a mile away from the car, on more level ground (thank god) I stepped down a small hill and my knee gave out. I’m not sure what happens physiologically when this happens but I think my knee popped out of joint, and then right back in.

This has happened periodically for most of my adult life. The first time I was in a mosh pit and I think I injured something. I couldn’t walk without crutches for awhile. I went to urgent care but didn’t have insurance so didn’t go see a doctor for follow up. The knee popping out thing has happened ever since with varying amounts of pain. I’ve been pretty good for awhile now. More than ten years I think.

When It happened on Sunday I fell to the in the most excruciating pain. Seriously. This is the most painful thing I have ever had to endure. The only thing that keeps me going is knowing that it will subside shortly, and it does. But for about a minute is it the worst pain ever. When the pain subsided I tried to get up and walk to see if I had torn a ligament or anything. I hadn’t and I was very relieved. My knee ached but I could walk. I started down the path but then started to feel kind of woozy. I had to lean on Raf as I was feeling this way. It started to get worse and I started to kind of worry. I broke out into a cold sweat and my hearing started to get “tinny” if that makes sense. Everything was muffled. Raf said he thought I passed out while he was holding me and I might have for a second. He had me sit down and rest for a bit. I started feeling better. I was so relieved. It kind of freaked me out that this was all happening in the middle of the forest! After awhile I felt good enough to stand up and walk. Raf found a nice branch that acted as as staff and I was able to walk back to the car.

My knee seems to be o.k. I have been taking it easy with the running but I have been able to walk to work with no problems. 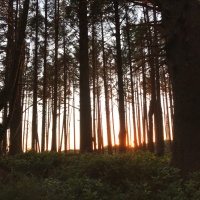