A few months ago one of my friends posted a photo on Twitter of what was (incorrectly) deemed to be the mission statement of a nutrition company: “Don’t Be A Dick.”

I often think about this phrase and how it can be a good motto in which to live one’s life (sexism aside).

In the lineage of Buddhism I practice, Soto Zen, we have a kind of code of ethics that we follow called the 16 Bodhisattva Precepts. In my (very limited) thinking, I feel like the precepts can be distilled down to the phrase, “don’t be a dick.” Or “don’t be a jerk (if that suits you better). If you are a jerk to people you will have to deal with the consequences of being a jerk, and it’s not fun and not going to produce happiness. Being a jerk causes suffering.

As I thought about this, I realized that I have been a jerk. In fact, I am often a jerk. I think we all are. I think being a jerk is a human condition and impossible to avoid.

So I think intention is what is really important. I think if you vow to not be a jerk, and do your best to practice not being a jerk, that is a noble path. Sometimes you will be a jerk, because you (we) are human and we make mistakes. But when that happens I think part of the practice is to be forgiving of yourself and others when you encounter jerky behavior. 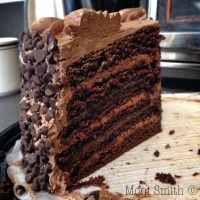