Participants
About
How It Works
F.A.Q.
TATL Pin Swap Posts

Currently in use by:

“What if a person just sent an entire camera, with film re-rolled and ready to double expose,  to another person? My Pinholga is lightweight and cheap, so if it gets lost in the mail it’s no big deal.” This is an idea Moni had after pondering film swaps and pinhole photography.  She asked Her friend Brendan if he would be interested in trying this and he was! She spent the next few weeks shooting a roll, then rewound the roll and sent it overseas to Ireland. Instead of getting the camera returned  in the mail, Brendan hand delivered it to her a couple of weeks later in Amsterdam when they met up for WPPD. It was loaded with a fresh roll that he had shot, rewound and ready to double expose – and thus another idea started to germinate (See the results from their Pinholga swap here and here). Monica was involved in the Traveling Yashica Project and it occurred to her that the little traveling Pinholga might be a good subject for a traveling camera project.

Unfortunately the Holga died quickly into the project. But we started over with a new camera! A much better camera! Todd Schlemmer is graciously donating one of his Terrapin 3d printed pinhole camera systems to the project! Behold, The Great Transatlantic Pinhole Filmswap 2.0 begins!
top

You will receive the Terrapin in the mail ready to go with a roll of film to shoot.

You will shoot the roll of film and develop it, scan it, and send me your favorite photos to post  on this blog. You will also share the scanned photos with the person who sent you the camera. (wetransfer.com is a great service for this).

In the meantime, you will shoot another roll of film through the camera. When you finish the roll, rewind the film  so it will be ready to go for the next person. Make sure the little “1” shows up in the red window!

Use the hashtag #TATLPinswap or #gitswap when discussing the project on Twitter and Instagram. This way we can track where in the world the camera is.
top

How long can I keep the camera?

2 weeks – one week for each roll of film.

What happens if the camera is lost/breaks/falls apart etc.?

This camera has been generously donated to the project so PLEASE DON’T LOSE/BREAK IT.   Thank you 🙂

Can I follow the travels of the Great Transatlantic Pinholga on social media?

Where can I find exposure tables?

Where can I find the results of this marvelous project?

You can find them here on this blog under the category: TATLPinSwap.

How can I participate?

Fill out the form below! 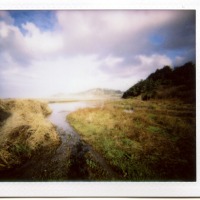