Here are some highlights:

I have been scrolling through the posts on my blog over the past year and I realize that I went through some rough patches of depression, so there were some not so great moments. But this is life. I have made it through these rough patches and today I am feeling good. I am happy and I am looking forward to a great year in 2016!

Since today marks the last post of my 100 Days project, I’m thinking that I might take January off from blogging, to give myself a break. We’ll see. I might miss it too much to take the whole month off. I’d like to take some time for myself, maybe develop my drawing practice again.

In the mean time, I wish you all a fantastic, and safe, New Years Eve. And may you have a peaceful and joyful 2016!

P.S. the video is my 1 Second Every Day project. I have been doing this now for 3 years. It is a compilation of 1 second from each day of 2015.

I have had a few people ask me how I develop film, so I thought it would write a blog post about it. I realize that there are dozens of blog posts on this process, and each person has their own way of doing this. As you develop your own film at home you will find our own way of doing it that works for you. And the way I do it is probably the easiest and laziest because I haven’t moved on to more intricate methods. But maybe you are just getting into film photography and haven’t ventured in this realm yet. Maybe, since the new year is beginning in two days, you want to try something new. Then this is the blog post for you!

I am writing this for the person who who hasn’t a clue about how to get started. This is where I was when this whole film photography adventure began. I thought about it so much that I talked myself out of it and it became this big scary thing. It took me years to finally gather the courage to develop film at home. YEARS. I had to take a class first to get up the courage to do it by myself.  I am here to tell you that it is not at all scary and it is so cheap that it is crazy to not do this yourself, given the cost to have a lab develop Black and White film. A lab would do exactly what you will do at home (this is why it is so costly to have them do it – they do not use fancy machines to develop B&W – it’s all done by hand).

At the end I will post a list of the supplies that I use – which is the very bare minimum.

A lot of people think that they need a darkened room to develop film. This is false. You could use a completely darkened room or you could use a dark bag to load your film into a tank. I use a dark bag to load my film. I prefer steel reels and tanks (as opposed to plastic) because I find it much easier to load film on steel reels. This is a matter of opinion though! In the dark bag you will need something to pry the top of the film canister off – like a bottle opener. You will also need a pair of scissors, as well as your tank and reels.

When you have the top of the film canister pried off and the film out of the canister, you cut the film so that the end is straight. If you are using 120 film, simply separate the paper from the film.

It might take a few tries to get it right! This is the hardest part.

I found this video helpful when I was learning how to load film on my reels.

Once you have your film in the tank and the top of the tank on it,  it is safe to be in the light. So I take the tank to the bathroom where I have everything set up and ready to go.

I have a gallon jug of water under the sink that I keep filled and it’s always at room temperature. I start by using this water to soak the film for 5 minutes. Use a 32 oz graduated cylinder to measure out the water and then use it to to fill up your 32oz tank.

While that is soaking I mix up the developer. I use Adox Rodinol and since I stand develop I use a very small amount.  Measure 10 ML of developer (I use one of these to measure such a small amount). Pour your developer in the 32oz cylinder and fill it up the rest of the way with water from your gallon jug. When the 5 minute soaking time is over, pour out the water that is in your developing tank and fill it up with the developer mixture. Agitate the tank by turning it upside down slowly 20 times and then set it on the counter for an hour. Pour it out down the sink when the hour is up.

After developing I like to fill the tank up with water and pour it out three times to give it a good rinse. Then it’s time for the fixer. Fix for 5 minutes.  I like to agitate for the entire time. I use Illford Rapid Fix.  which I have mixed beforehand. You can reuse fixer a few times. The instructions for mixing this are on the bottle. I think I use 1+4 – which means for 32oz (1000 ml) I would fill 200 ml with fixer then the rest is water. After the 5 minutes is up, pour the fixer back in the container.

Now it is time to wash the film.

Wash by opening the tank (it is now safe open) and letting water run over it for 10 minutes – pouring out the water every 2 minutes.

After washing, I pour in a mixture of photo-flo (2 drops mixed with 1000ml of water) and let it soak for 2 minutes. I hang the film from the shower curtain rod using binder clips and shower curtain hangers.

Again, this is pretty bare bones.  But for getting started, stand developing is pretty simple and easy.

Now go forth and shoot film!

I wrote this a month ago and have been sitting on it, hesitant to post it in the days leading up to Christmas because I didn’t think that a post on hopelessness would be appropriate. But now that Christmas is over…

I am taking another WordPress writing 101 class and today’s assignment is to write a post inspired by a single word. One of the words on the list was “hope.” It’s really weird that this is a suggestion because when I asked Twitter last month what I should write about one of my Twitter friends suggested “hope.” So I’ve had this empty draft sitting on my dashboard for a month entitled “On Hope.” I suppose I’ve been writing it in my head.

I feel very ambivalent about hope. Some of the thoughts I have are probably not going to be very popular.

After I wrote that paragraph I happened to be reading through a kid’s books for work. In the book one of the characters reads from a book and this is what it says:

‘Tis hope that in our hardest times inspires.

If the cold of winter stops you in your tracks,

Let hope be both your compass and your fire.

This is little poem sums up what society thinks about hope, doesn’t it? That it is our compass in our darkest hour. And I like that thought. I like the thought that tomorrow will be a better day, and that hoping for the future will help me make it out of a dark time. And I suppose there is some truth to that, in the sense that impermanence exists and that everything we experience is temporary.

It kind of seems to me that hope is just another word for grasping for things that we want. And grasping leads to suffering. And suffering sucks.

This blog post here explains what I am thinking on this topic.

I would like to propose that giving up hope will make you feel much better. Hope focuses on the future, and the future doesn’t exist. So, in essence, hope is delusion.  Deal with what is right in front of you in each moment, because that is all you have.

I say all of this but the idea of hope is so deeply ingrained in the core of my being and it is hard to break the habit. If I was in a situation that was truly terrible I might feel differently. Maybe? But then I have been in a terrible situation and when I was in that situation I was forced to deal with what was happening right in front of me. It was scary and horrible but I faced it and felt all of the feelings associated with it and it seems like that was the right way to deal with it.

Though I imagine that there are really terrible situations where, perhaps, hope can help.

In the end, though, my hope is to someday be able to live a hope-free life.

I still don’t know what to think about hope, re-reading this a month later. I think I am still addicted to the lovely feelings that hope generates. Maybe addicted is not the right word. Maybe it’s human nature to hope. But on the other hand, I understand the importance of focusing on the present moment because that is all I have. Everything else is delusion.

This is just another one of those Buddhist teachings that I am grappling with at the moment. Thank you for listening, dear readers. 🙂

I managed to draw one thing this past week: my newest pinhole camera. It’s a Nopo 35 and I am very excited to finally have it in my possession. It’s a beautiful hand made camera and also very practical. The shutter opens by turning the front. It has threading for filters (which I’m looking forward to playing with). I’m not usually fond of 35mm for pinhole – mostly because the cameras are not ideal for the 35mm cartridges. But this one is unique in that you can rewind the film back into the original cartridge. I am still on my first roll, but I am already thinking this is the pinhole camera I take with me to Barcelona next year! The economy of 35mm would be worth it! 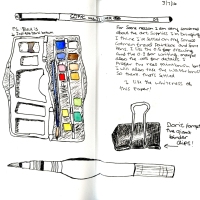