In one of my tarot decks the 3 of swords card is represented by an image of an airplane flying through the sky.  More traditionally, the 3 of swords card is represented by a heart pierced with 3 swords. There is no question what this card means. It is the card of heartbreak. I think everyone knows this feeling well. The feeling of heartbreak literally feels like swords piercing your heart. So I find it interesting that the 3 of swords card is represented by an airplane in this particular deck. For me airplanes stir up all kinds of  feelings which include happiness, sadness, and anxiety. There is the excitement of getting on one when you are about to fly across the world to visit a place you have never been before, the anticipation of things to come. Then there is the gut wrenching feeling of separation when you see loved ones get on a plane to leave, or when you get on a plane to leave a loved one. That feeling of separation is heartbreak. It is swords piercing the heart.

Sometimes when you are in the middle of a heartbreak it feels like there will never be a way out. But there always is. There is always a destination. The plane will land at the end of the journey and you will get on with your life.

Today I am thinking about my stepfather, Doug, and his death 9 years ago. Heartbreak is a weird thing. There is a feeling of very painful grief, but then within that grief there is also a release, a feeling that there is a destination, that there is an other side. You just have to get through these clouds first before you get there. 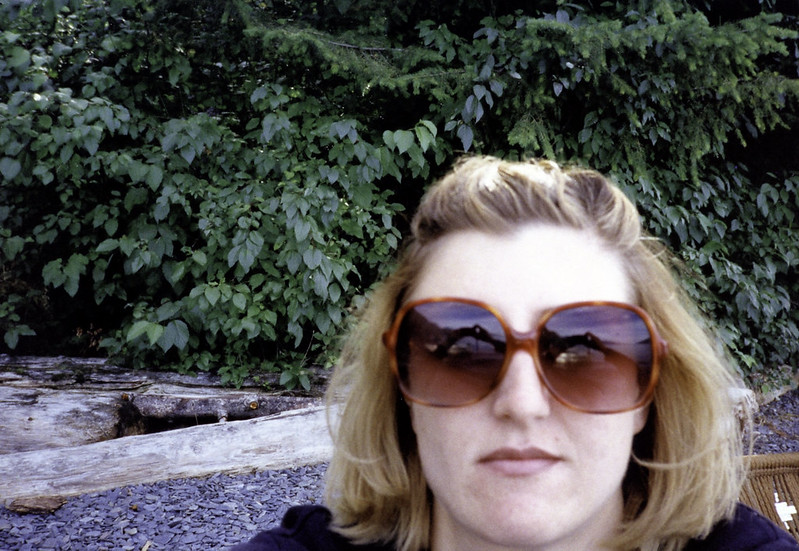 28.
I am visiting my family on Lake Pend o’Reille in Idaho. I am about to enter the Literature program at UCSC and am reading my first homework, “The Sorrows Of Young Werther.” Quite possibly the most depressing book I’ve ever read.
———— 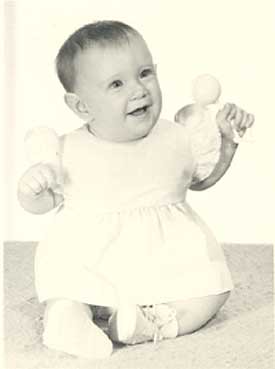 1
In 5th grade I bring this photo to school for a project. My teacher gushes, “look at that chubby baby.” I am mortified. 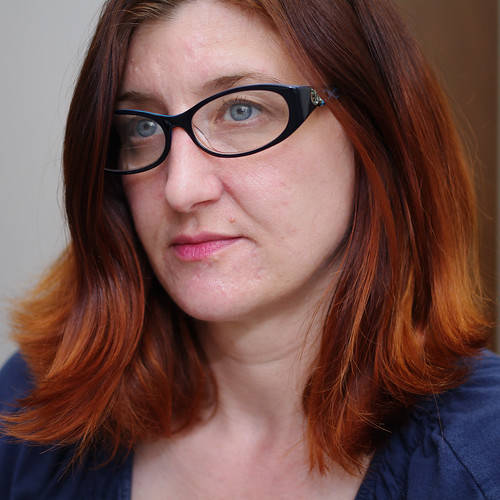 44
I put on my first pair of bifocals. 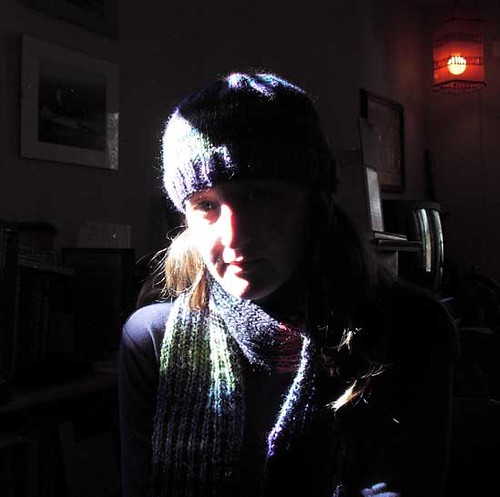 35
I am living in Santa Cruz, California and knitting wool hats and scarves.

27
I am a nanny in Menlo Park, CA for a high-powered lawyer and I live in an incredible house. I am finishing up a roll of film and decide to take a self portrait with the last shot on the roll. 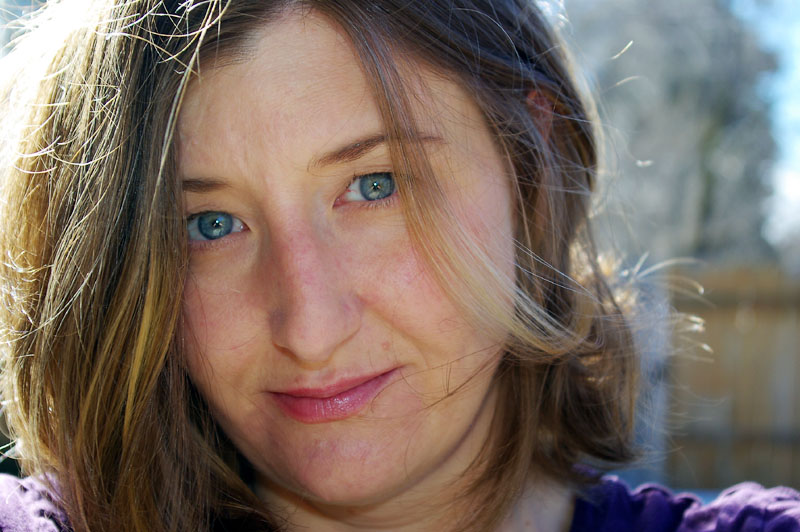 39
I begin the last year of my thirties. 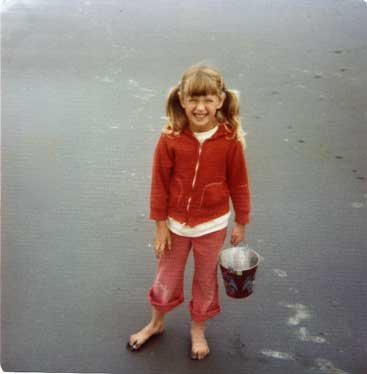 7
I am on Cannon Beach digging clams. 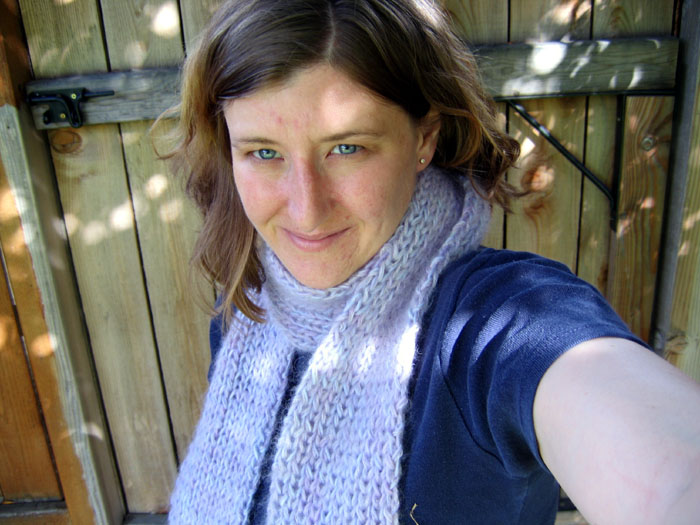 37
I am living in Spokane, Washington, standing in the yard of the house we just purchased. 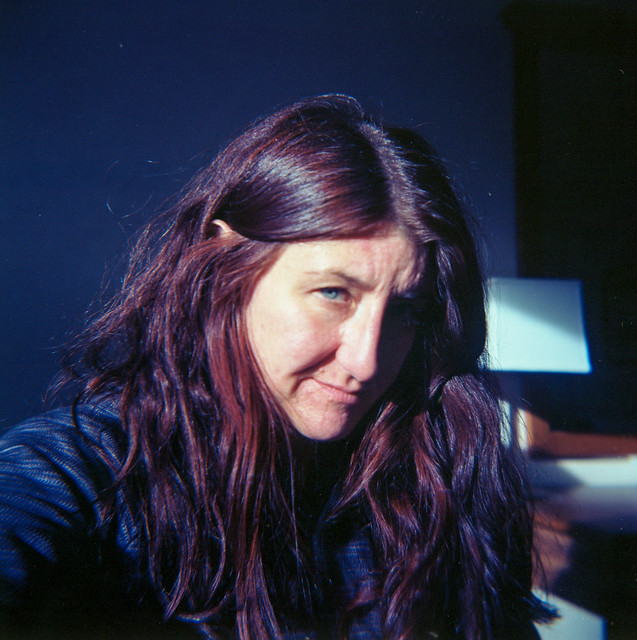 46
I am in a Hotel room in Newport wasting time with a Holga by taking a selfie while waiting for my husband to finish his run.

I remember summer days when I would ride my bike for hours and hours around the block.

I remember the smell of oil on our gravel road. The smell reminds me of summer.

I remember the big mud puddle in front of our house, filled by the sprinkler. We would concoct worlds in that puddle.

I remember the school across the street, through the field and over the fence. It was our world away from home where we could have contained adventures.

I remember the sweet scent of grass in the summer heat. Picking dandelions. Looking for four leaf clovers.

I was standing on Mt Hood alone at twilight. It was 2009. I had just applied for my job at Sandy Library – or maybe I hadn’t applied for it yet. I think I was thinking about applying for it. Raf and I decided to have a getaway vacation in late August so we stayed at the  Timberline Lodge for a couple of nights. The first night there we went for a walk behind the lodge up on the trails. Raf went ahead of me on the Timberline Trail to see what was up there and I stayed behind, taking pictures of lupines. The sun was setting and the light was beautiful.

I was in a stressful place in my life at that time. I was really unhappy where I was. I hated living in Spokane and so did Raf but we felt stuck. When I was on Mt Hood that evening all of that stress and unhappiness melted away for a few moments while I stood there. I shot my photos and stood up and took a breath. I was alone on the trail. I looked around at the beauty around me and was in awe of it. I let the beauty sink in. I felt the cool breeze. I looked at the carpet of purple before me that I was photographing. My senses seemed to be tuned in – superpower style – to that moment. My sense of hearing kicked in and I heard a strange sound. I heard the sound of thousands of bees buzzing. It was an amazing sound and I tuned in a bit more. I just sat there and listened to the bees for what seemed like an eternity. I was in awe. I was in this amazing, beautiful place, listening to thousands of bees going about the mundane business of pollinating flowers. In that moment I realized that I was happy. I felt happiness. I felt pure happiness.

It is a strange thing when you realize you are feeling happiness.  I don’t feel pure happiness very often. I can probably count the times I have felt this feeling on one hand. Each time has been special and I remember these times with great clarity.

It still blows my mind when I think about the fact that I had no idea I would be moving to Mt. Hood two months later. It is amazing how much can change in such a short amount of time. My whole life changed from that moment.

“Think Global, act local.” Write a post connecting a global issue to a personal one.

My take on this is different from what is probably meant by the author of this prompt. Hopefully it won’t seem shallow. On the surface it might seem that way but I believe there is something very profound going on. It is hard for me to express exactly what that is at this point. I think the idea is still percolating inside of me.

Before I go on I need to say that I do believe in the classic sentiment of “Think global, act local.” I believe that it is important to do your part to make sure our world is livable for future generations. It can be an overwhelming endeavor and sometimes I don’t really even know where to start. Throwing that glass bottle in the recycling bin feels so empty when I look up at Mt. Hood and see the lack of snow on it in the summer (when 20 years ago there was so much more of it). It feels like my small act does nothing. I am told that it does, but it’s hard for me to see that. But I do believe very much in the spirit of this statement and I will continue to do my part.

Ok, with that out-of-the-way, here is what instantly bubbles to the surface of my gray matter when I read this statement:

It took me awhile to realize there was a global community of film photographers. I kept seeing this “believeinfilm” tag on everything but didn’t really think anything of it. Eventually I figured it out and started connecting with people. These connections continue to grow everyday and it seems like it has taken on a life of it’s own. It’s amazing. I am meeting really incredible (and creative) people all over the planet. And they are good people! Good souls. I feel like I have found my tribe, if that makes any sense at all. For the first time in my life I feel like I fit in somewhere. I have never felt this before. I have always been the square peg trying to fit into a round hole.

I think about the fact that this is such a far reaching global community of people. I am kind of blown away by this when I think about it. Only in this day and age could this happen, thanks to the internet and social media. The internet has brought this group of people all over the world together. How incredible. I think about the fact that I can have a real time conversation with somebody on the other side of the globe and it blows my mind. I’m sure that this is because I am old enough to know what things were like before the internet, so I can appreciate the technology. I imagine this is how people felt when the telephone was invented :). But not only can I converse with one person I can converse with groups of people who live in far reaching corners of the world. This is the part that is really cool, I think. I often have dreams about Twitter and FB. In my dreams Twitter is this really cool house party and I am hanging out with all of my Twitter friends and having a great time.

When a group of people are supporting each other in a positive way globally it affects an individual on a local level. Because of my positive interactions with my film photography friends I go out into the “real world” and spread that positivity around to others around me. And maybe some of this positivity will help me feel less overwhelmed about my small part in taking care of the planet too.

Because love is a recursive function. When you give it it multiplies and spreads out in ways we don’t even see.

Note: The photo above is from my first film swap with Brendan from Aware of the Void. I think these film swaps play into these thoughts that I have on this global connection, but I will write more about that in a later post.  You can see more film swap photos here.